Tissue displacement occurs anytime body tissue moves in response to pressure. As areas of abnormal tissue form within an organ, the tissue often becomes more dense and less elastic. When pressure is applied to the organ, abnormal tissue generally exhibits less displacement than normal tissue. This difference can be detected and measured.

Mechanical imaging is a non-invasive analysis of tissue movement and displacement.  The ProUroScan technique works by computing how tissue moves in response to pressure, this evaluating its softness or stiffness.  During a procedure similar in nature to the digital rectal examination, the clinician inserts the tip of the system’s probe into the patient’s rectum and palpates the prostate.  Sensitive sensors on the head of the probe collect a sequence of pressure patterns when the probe is pressed against the prostate.  The device consequently measures the prostate’s elasticity.  Each can produces an image of the prostate and compares elasticity measurement across the gland. 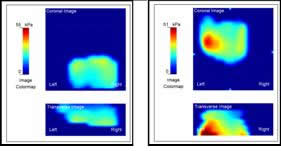 The technology employed is based on work originally performed by Artann Laboratories Inc. (Trenton, NJ) under a series of government grants, including a $3 million Small Business Innovation Research Phase II Competitive Renewal grant received in 2006 from the National Institute of Health and the National Cancer Institute.  This grant was made specifically to advance the development and application for clearance of the ProUroScan System by the FDA.  We have entered into license and development and commercialization agreements with Artann relating to their existing technology and know-how and all future technology developed by Artann in our field of use.

Using a sophisticated positioning system and complex mathematical algorithms, the ProUroScan technology is able to assemble the individual images it generates into a composite image of the prostate.  Tissue exhibiting comparatively less elastic properties is identified by darker colors on the image, similar to how areas of precipitation are displayed on a weather radar map.  The differences in elasticity that are identified and their position within the prostate help the physician to better characterize the patient’s status.

Mechanical Imaging into the Future

We believe the ProUroScan System’s existing technology provides a platform on which to develop multiple future generation systems. In the future, we intend to work to develop and introduce enhanced versions and additional indications for this technology.  For example, this system may be able to monitor changes in prostate tissue over time, guide prostate biopsies, do prostate disease screening and assess changes in prostate size following drug treatment for benign prostate hyperplasia (“BPH”).  Future generation systems will require us to obtain regulatory approval or clearance by conducting studies and filing additional submissions with the FDA.

Other Prostate Imaging Technologies and Applications

Mechanical imaging is different from trans-rectal ultrasound (TRUS).  The TRUS procedure serves as today’s gold standard for performing prostate biopsy because of its ability to see and guide the biopsy needles.  It is not used as a basic screening or detection tool because of inadequate image quality.  Other technologies like Magnetic Resonance Imaging (MRI) and Computerized Axial Tomography (CAT) scan or x-ray are also not used for basic prostate screening or detection.  These later two technologies are also expensive and access to them outside of major medical centers is limited.