ProUroScan is an advanced medical imaging system that uses an array of sensors mounted on a rectal probe, a central processing unit and software and image construction algorithms to provide a real time color image of abnormalities in the prostate.

The system provides an image or record of the pressures that are generated from palpation of the posterior surface of the prostate using a rectal probe. The system’s operation is based on measurement of the stress pattern created when the probe is pressed against the prostate through the rectal wall. Temporal and spatial changes in the stress pattern provide information on the elastic structure of the gland and allow two-dimensional reconstruction of prostate anatomy and visualization of prostate mechanical properties. The prostate image is displayed on a screen that allows physicians to visualize tissue abnormalities in the prostate gland. In addition to the real time visual image, the results are stored electronically as a digital record. 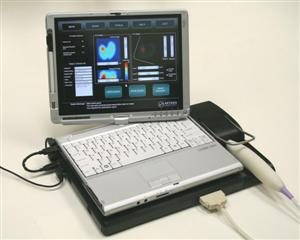 The ProUroScan System probe is specially designed for the rectal anatomy to minimize patient discomfort. It is ergonomic for the clinician and similar to a traditional DRE for the patient. The probe utilizes highly sensitive pressure sensors located on the face of the probe head to palpate the prostate. The probe’s positioning system ensures that the person administering the scan examines the entire surface of the prostate, and assists prostate image construction.

To perform a scan, the clinician inserts the tip of the probe into the patient’s rectum and palpates the prostate. As the prostate is palpated, an image of the prostate is produced and displayed on the computer monitor, along with indicators of the amount of pressure being applied to help guide the clinician. The image that is generated during the evaluation shows the physician in real-time where abnormal tissue exists in an otherwise homogeneous soft tissue organ. 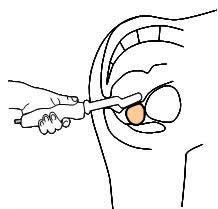 Mechanical or elasticity imaging refers to a non-invasive analysis of tissue movement and displacement. The ProUroScan technique works by computing how tissue moves in response to pressure, thus evaluating its softness or stiffness. Sensors on the head of the probe collect a sequence of pressure patterns while the probe is pressed against the prostate. The device consequentially measures the prostate’s elasticity. Each scan produces an image of the prostate and compares elasticity measurements across the gland.

A Two- and Three-Dimensional Prostate Image

The image of the prostate that is created is designed to identify variations in tissue elasticity using a specially designed rectal probe.  Once the image is created it can be utilized by the physician to assist in evaluating the results of an abnormal digital rectal exam for men and stored as an electronic record. Tissue that is confirmed by DRE as abnormal will exhibit less elastic properties and be represented by progressively darker areas on the image of the map as compared to normal tissue. During the real-time imaging examination, the physician can direct the probe to specific areas of interest as confirmed by DRE. The final composite image is saved in a file as a permanent electronic record and can be conveniently retrieved to view previous test results.