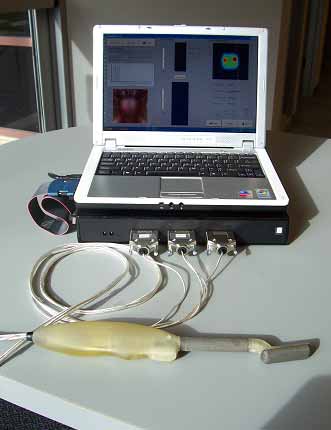 The ProUroScan imaging system is being designed to detect certain abnormalities that may be missed by other diagnostic techniques. These abnormalities include areas on the surface or within the prostate where the tissue has a different level of elasticity or stiffness when compared with the rest of the gland, which can be precursors to a more clearly defined hardened area or nodule. The ProUroScan offers the advantage of being able to create an electronic record that can be stored within the system, printed and used for comparisons with new images created at a later date. No such electronic records or color images are possible when performing a traditional DRE.

The ProUroScan system consists of a probe, a central processing unit containing proprietary image construction algorithms, a computer with color monitor and keyboard, a color printer, and single-use disposable sheaths to cover the tip of the probe. The ProUroScan probe is specially designed for the rectal anatomy to minimize discomfort. It is ergonomic for the clinician and similar to a traditional DRE for the patient. The probe utilizes pressure sensors located on the face of the probe head to palpate the prostate. The probe’s positioning system ensures that the person administering the test examines the entire surface of the prostate, and assists prostate image construction.

The probe attaches to the central processing unit which converts the information from the probe sensors with proprietary algorithms and then translates the data into a multicolor image on the monitor.

To perform a test, the clinician must first place a single-use disposable sheath over the probe head and shaft and cover it with a lubricant. The tip of the probe is then inserted into the patient’s rectum and palpates the prostate. As the prostate is palpated, a color image of the prostate is produced and displayed on the computer monitor, along with indicators of the amount of pressure being applied to help guide the clinician. Differences in tissue stiffness and elasticity will be depicted on the monitor in different colors. Total testing time for a healthy prostate should be under one minute.

Ideally, the ProUroScan will be administered by a trained clinician on all patients in need of a prostate exam. Standardizing the procedure using the ProUroScan mechanical imaging device should minimize the differences in abilities between physicians in this otherwise subjective procedure. We expect the system will also be more sensitive and have the ability to detect abnormalities that the normal human finger cannot detect, thereby improving the quality of the diagnostic process. It will also enable physicians to literally see the differences in tissue elasticity or stiffness on the color monitor instead of a traditional DRE that is “blind” and relies exclusively on the clinician’s sense of touch. The system will create a hard copy of the prostate diagnostic procedure which can be placed into the patient’s file. This will be advantageous for the physician on multiple fronts, as it gives the physician the ability to compare and contrast the patient’s results from exam to exam, and to get second opinions on the patient’s status in regards to the diagnosis.

We believe the ProUroScan is truly unique in the market. The closest comparison can be made to an examination using a transrectal ultrasound device. Transrectal ultrasound (“TRUS”) is a test that uses a rectal probe and sound wave echoes to create an image of the prostate gland, thus allowing visual inspection for abnormal conditions. Although well established as a highly accurate test, TRUS is used primarily as a guide for prostate biopsies, and is seldom used as a screening test. It is a very expensive test, costing hundreds of dollars each, difficult to interpret, and requires approximately 20 to 40 minutes to perform. The ProUroScan uses mechanical imaging rather than sound waves echoes, has a probe that is smaller than that of an ultrasound probe, will be performed in less than one minute, and at a much lower cost. The results of the test are displayed in color, making the results of the diagnostic test easy to interpret. 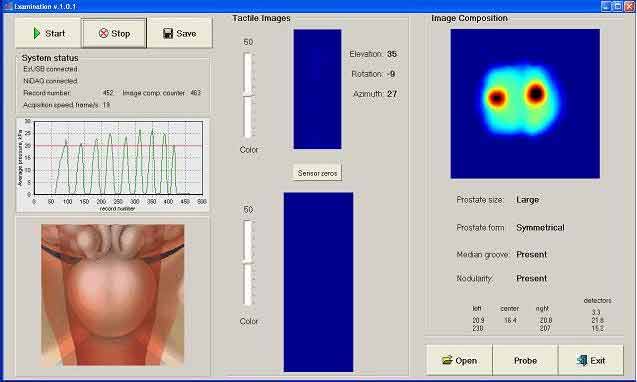 We anticipate that the majority of its revenue will be generated by usage fees based on consumption of proprietary disposable sheaths and/or probe tips. The systems themselves likely will be placed in clinics under a variety of programs, including operating leases, financing leases, outright sale, or placements paid for by premiums paid on the usage of the system.

We intend to position this product as an adjunctive test to DRE and Prostate Specific Antigen (“PSA”) blood tests, which have low sensitivity and specificity and cannot be documented with color images. The ProUroScan will be marketed towards primary care physicians and urologists. We believe the ProUroScan will help ensure that primary care physicians screen more effectively and quickly refer appropriate patients to urologists for more definitive testing.